In close playoff spot races, it will not come down to the final weekend as all four playoff spots were clinched this weekend by the Blue Sox, the Bandits, the Aces, the Cavalry, and the Heat.

After the Blue Sox lost the first game against the Auckland Tuatara 6-0, the club bounced back with close victories in Saturday’s doubleheader (2-1 and 4-2). Also, today’s victory over Auckland wasn’t one with big numbers as they beat the Tuatara 9-6.
In Thursday’s 6-0 loss, Alessandro Maestri reached double digits in strikeouts again (10) as he gave up one run on five hits and a walk. With that one run Auckland scored, Sydney would have lost as well as the offense didn’t push through with seven hits and

five walks. The glimpse of hope Sydney had faded away when Alessandro Maestri was replaced by Tyler Herr. Herr pitched 0.1 innings in which he gave up five runs.
Dutch hoofdklasse player, Dwayne Kemp, had a good weekend as he raised his batting average from .323 to .343 in the two games of the doubleheader and Sunday’s game. Dutch hoofdklasse pitcher Shogo Nakashima pitched 1.2 innings, in Thursday’s loss. In that outing, he gave up two hits and struck out three.

As Canberra and Brisbane split their series, Sydney got in the lead of the standings by two games over the aforementioned two teams.

As Canberra won the first two games of the series between the two, things started to look bleak for Brisbane. But the Bandits bounced back as they won the following two games. Tim Atherton pitched a seven-inning complete game in the first game of Saturday’s doubleheader, in which he gave up three runs on seven hits and fanned thirteen.

Geelong-Korea avoided being swept by the Perth Heat as they won the final game of the series 13-10 in ten innings as they scored five runs in the tenth inning to secure the win.
In the other three games, Perth won relatively easy, especially in Saturday’s game as they crushed Geelong-Korea 19-1. In that 19-1 victory, Tristan Grey drove in seven runs on three hits (two home runs).

Even though very slim, Adelaide still had a chance to make it to the playoffs. But then it had to win all games and its competitors had to lose. But by being swept by the Melbourne Aces, the Bite’s hope was slashed. Former Dutch hoofdklasse pitcher Dushan Ruzic started the second game of Saturday’s doubleheader. He lasted five innings in which he allowed three runs on eight hits and a walk as he struck out two. But as Melbourne trailed Adelaide by the time he was replaced, Ruzich got the no-decision.

Perth and Melbourne are tied for first place. With the Aces facing a rather weak opponent and the Heat must flex its muscles to shove the Cavalry aside in the battle for first place next week.
In the Northeast division, Sydney will defend a two-game lead over Brisbane as it will take on the Adelaide Bite while the Bandits will have a walk in the park as they face Geelong-Korea. Canberra on course for a spot in the wild-card game can still avoid this as they win more games than the Brisbane Bandits. But with the Bandits facing Geelong-Korea, they will likely avoid the wild-card game.

Here is an overview of the ABL playoff procedure: 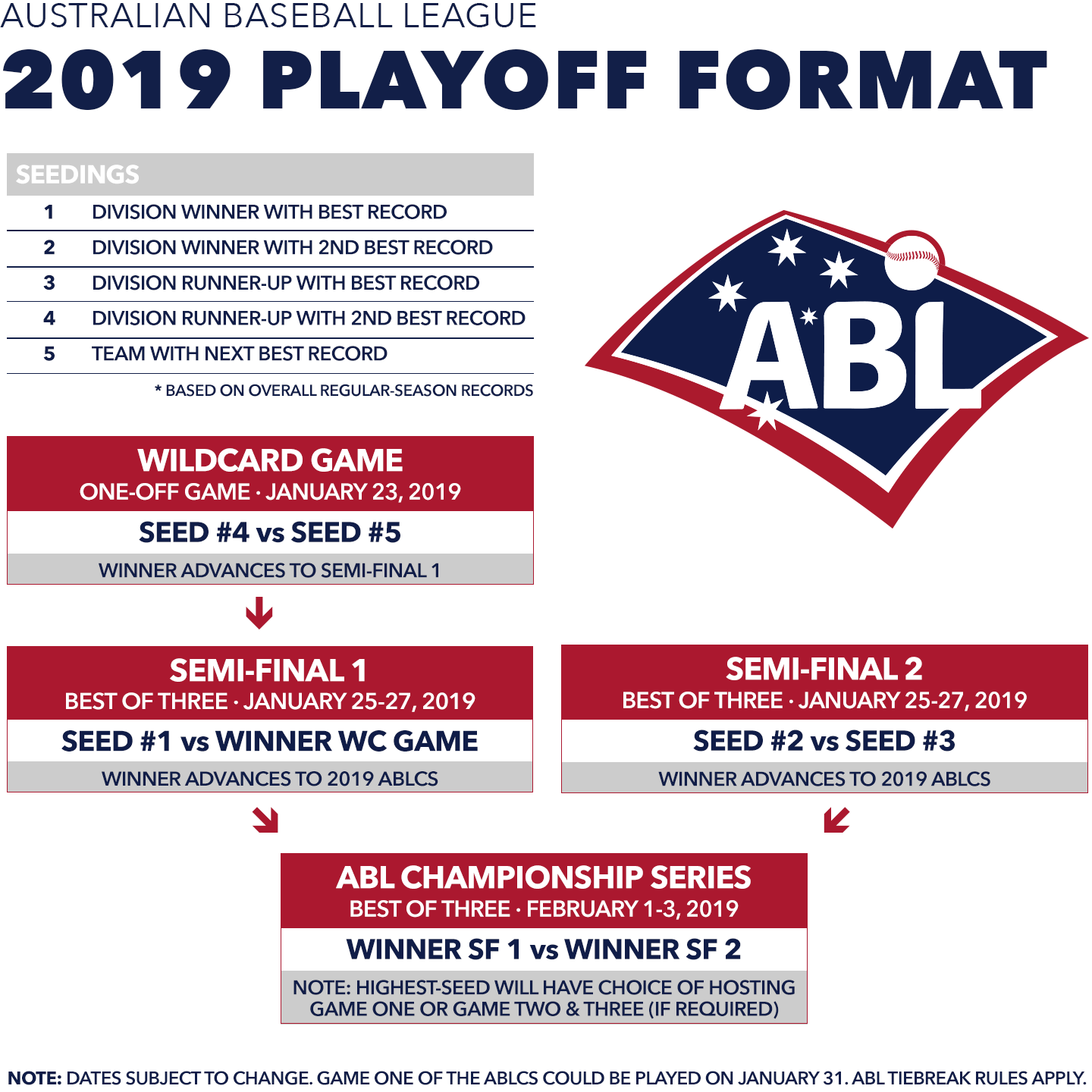