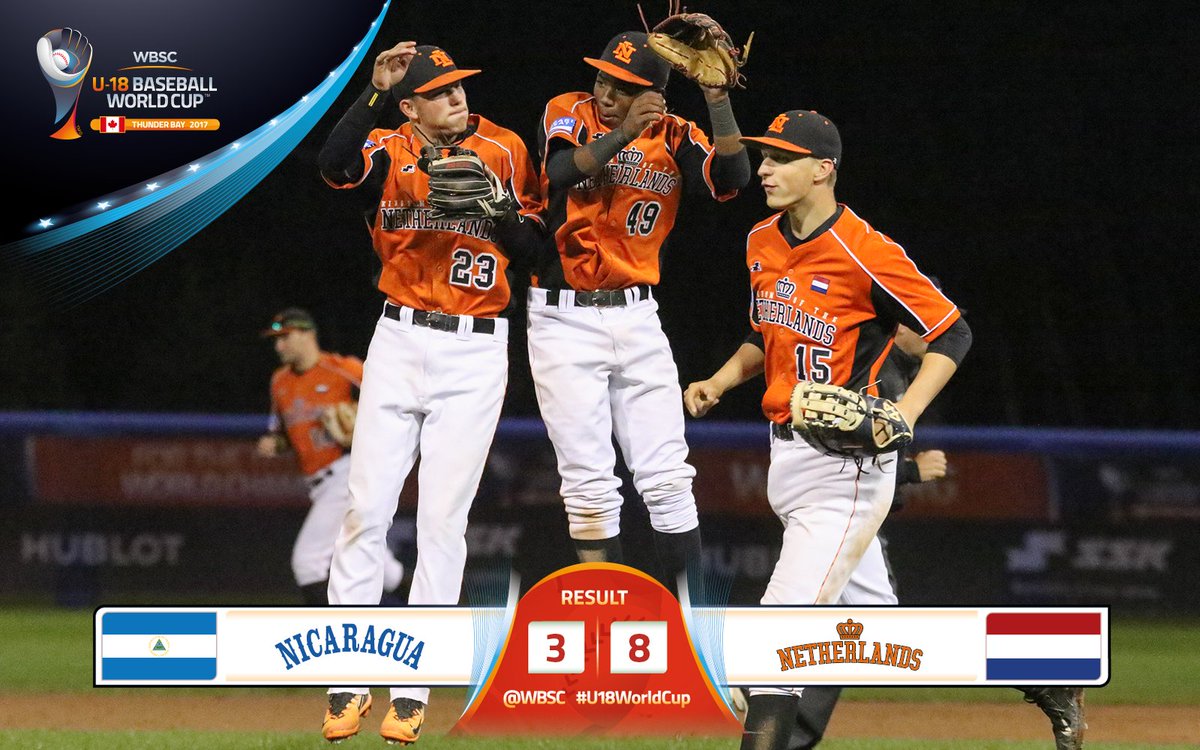 The Kingdom of the Netherlands moved on from where they left the first round: With a win. This time the Dutch put Nicaragua aside in a convincing 8-3 victory.

Nicaragua came close to score a run in the first inning when Anthony Valdez Solano got on base on a fielding error and advanced to third on a double by Jose Hurtado Samora, but Valdez Solano tried to score all the way from first base and was tagged out at home plate by Dylan Koster thanks to a 7-6-2 play.

In the third inning, the Kingdom of the Netherlands had a chance to take a lead as it loaded the bases with two outs, but Richegelon Juliana grounded out to first base for the final out of the inning.

With runners on the corners in the fourth inning, it appeared that Frensly Leito would get out of the inning as he retired two consecutive hitters with a fly out to first base but then he issued a walk and hit Jefersson Lopez Meneses with a pitch to allow the opening run to Nicaragua. Also Carlos Perez Melendez was hit by a pitch to give Nicaragua a 2-0 lead.

Finally, in the fifth inning, the Dutch got on the board. With one out, Denzel Bryson singled through the right side, followed by a walk drawn by Jeandro Tromp. With Makesiondon Kelkboom at bat, the two runners advanced on a balk to give the Dutch runners in scoring position. Kelkboom hit a two run double to left center field to tie the game at two.

After scoring the go-ahead run in the sixth inning, the Dutch would walk away in the seventh for good. Thanks to two singles and a walk, the Kingdom of the Netherlands scored the fourth run. Tijmen Takke followed with a bases loaded walk and still with the bases loaded, Denzel Bryson hit in a force out at second base but drove in Dylan Koster for the sixth Dutch run. Two more runs were scored on a couple of errors.

Nicaragua would score one more run in the eighth to reach the final score.

Despite being outscored, Nicaragua collected nine hits vs the eight of the Netherlands. Both teams left ten runners on base. Nicaragua committed three errors while the Dutch had two miscues.

With another solid outing in relief, Stefan Ianelli earned the win. In four innings he gave up one run on four hits and two walks and struck out five. Frensly Leito, who started the game, also pitched four frames in which he gave up two runs on three hits and two walks and struck out three. Aaron de Groot pitched the final inning and gave up two hits.

Best hitter for the Kingdom of the Netherlands was Dylan Koster who went 3 for 5 with a RBI and two runs scored.