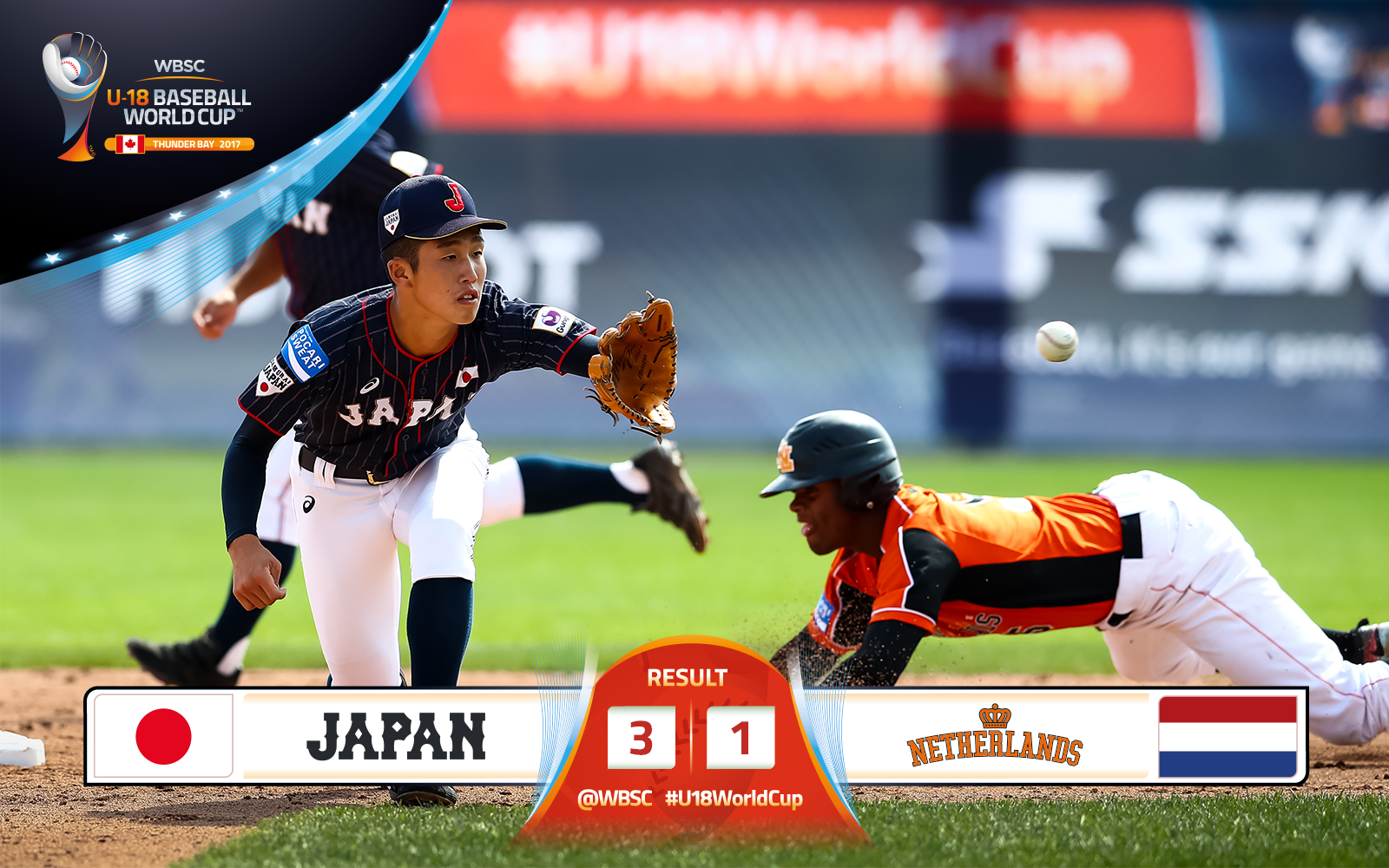 In a pitching matchup between Samurai Japan and Kingdom of the Netherlands was on course to pull off an upset, but in the sixth inning, Japan turned the tables and eventually walked away with a 3-1 win. Both teams played very good baseball and because of that, it was an enjoyable game.

Donny Breek took a no-hitter into the fifth inning but the leadoff batter, Kotaro Kiyomiya, drove the ball to left center field for a double. A sac bunt laid down by Shosei Nakamura advanced Kiyomiya to third base. But Donny Breek neutralized the threat as he retired the next two hitters to get out of the inning without any damage.

By then, the Dutch had taken a 1-0 lead already. In the fourth inning, with one out, Richgelon Juliana singled to left center and stole second to get in scoring position. Shèrten Apostel followed with a double that hit the outfield wall about a foot underneath the yellow home run line, to drive in Juliana for the opening run.

In the bottom of the fifth inning, the Kingdom of the Netherlands drew two consecutive walks and both runners advanced a base on Jeandro Tromp’s 4-3 groundout. But the Dutch could not cash in as Makesiondon Kelkboom also grounded out 4-3.

For five innings the Dutch could keep the Japanese at bay but in the sixth inning, they started pressing which resulted in runners on the corners with nobody out, thanks to a perfectly executed bunt by Kenshi Nishimaki.  A throwing error by Donny Breek on a pickoff attempt, allowed Japan to score the game tying run, and put a runner in scoring position, still with no outs. The Dutch had problems making the first out and the Japanese put runners on the corners again. But Donny Breek got his revenge from his failed pickoff as made a second attempt that was successful as he bowled Kyota Fujiwara off first base for the first out. A flyout to shallow right field prevented Japan from scoring but a wild pitch eventually gave Japan the lead as it allowed Kenji Nishimaki to score the go-ahead run. Eventually, the Dutch came out of the inning but by then the damage was done.

Fumimaru Taura, who entered the game in relief in the sixth inning, completely owned the Dutch lineup as he retired batter after batter and struck out seven in the three innings he was out on the mound.

In the top of the eighth, Lars Vogelaar replaced Donny Breek. After he retired the first batter, the next one got on base on a mental error by the Dutch defense. Kazuya Maruyama hit a pop up to center field and the Dutch middle infielders chased it as it fell right in between them and the outfielders. With no fielder there, Maruyama took advantage and advanced to second base. Vogelaar then hit the next batter, so Japan put runners on first and second. A grounder through the left side of the infield drove in Kazuya Maruyama who avoided the tag with a nice hook slide to score Japan’s third run and put runners on the corners with only one out. Stefan Ianelli then replaced Lars Vogelaar and got out of the inning, limiting the damage to the one run Japan had scored.

After Japan didn’t score in the top of the ninth, it all came down to the final at bat for the Dutch. But the Japanese manager decided to send Taura to the mound for one more inning so the race was run as he raised his number of strikeouts to ten as he retired two of the five batters he faced on a K for the win.

Despite pitching a solid game, Donny Breek had to take the loss. He lasted seven innings in which he allowed two runs (one earned) on four hits and a walk and struck out seven.

Best hitter for the Netherlands was Shèrten Apostel who went 2 for 3 with a RBI. Richgelon Juliana was the other Dutch player that got a hit as he went 1 for 4 with a run scored.

Of course, the result will be disappointing for these kids, but the Dutch could walk off the field with their heads high as they made Japan work very hard for its money. A 3-1 defeat against one of the top countries in youth baseball is nothing to be ashamed about.