The Empire State League of Georgia was founded in 1913 by James Sinclair, an executive with the South Atlantic Line Railroad which held office in Waycross. For his local baseball team, Sinclair sought to gain entry in the South Atlantic League to play in the 1913 season. But the league wasn’t looking for another team and none of the teams was looking to be replaced. Eager for a spot in a league, he came up with the idea to start one of his own. Sinclair invited representatives of various interested cities and they met several times.
A committee was formed and Sinclair was elected chairman. Teams would pay $100 to the league as an entry fee. The teams had to show that they had at least $300 cash, and they had to post a $500 bond to guarantee compliance with the salary cap. Each team would have local ownership. Six teams, representing Americus, Brunswick, Cordele, Thomasville, Valdosta, and Waycross, raised the required funds and formally joined the league by the end of February 1913.

The league would be called Empire State League and Sinclair would be the president. But his tenure as president was short lived as he needed more time to spend with his company. After his retirement, a local businessman, C.C. Vaughn was elected President.
The league chose to be part of the National Association and their request was granted in March. The board of the league thought it was important to be a member of the National Association as it provided stability. For the schedule it did not really matter as the league could have started as an outlawed league. But by becoming a member of the N.A, no players could be raided from the ESL team rosters during the season beacause all members were expected to respect the contracts of the players. The league would get a Class D qualification.

Each team in the Empire State League had twelve players and the pay was limited to $1,000 per season. The teams were allowed to have only three players on their rosters with experience higher than Class D in previous seasons. With twelve players on the roster, the pitchers had to be able to play another position. Most of the teams had player-managers instead of full time managers.
Even though there was not a formal agreement with other leagues, players from other (higher) leagues played in the Empire State League. Sometimes as a part of a rehab, sometimes even as a player sent down by an MLB club (in a time in which the farm system wasn’t even invented yet).

In previous years there were attempts to form professional leagues. Some got stuck in the preparations others folded during the season. In the early 1900s towns in Southern Georgia grew thanks to new jobs, mainly in extracting raw materials for the big factories up in the North. Thanks to these new jobs, population grew rapidly. Many of the cities saw a local sports team as the city’s business card.

The creation of the Empire State League should be seen as professionalization of something that already existed in Southern Georgia. Players on the rosters of the professional teams, already played in previous years for teams of the same towns.
In fact the league followed the rivalries that already existed, like the one between Thomasville and Monticello.

The league scheduled six games per week, three home and three road games and the teams did not play on Sunday. Traveling was done by train. Games would start at 3.30. The ballparks were nothing special, to put it mildly. Wooden open air grand stands provided much of the seating. The playing surface was a dusty soil most of the time, which made it hard to grow grass.

Opening day was on May 1. Waycross visited Brunswick, Americus headed to Cordele, and Thomasville went to Valdosta. Most businesses closed early on that day, which was common in those years of small town baseball. The season was split in two halfs of 45 games. During the season, the league discussed to let the winner face the winner of the South Atlantic League for a post season series but that idea never got off the ground. Instead a post season series vs the Sally League winner, the Empire State League opted to extend the 90-game schedule to 102 games and let the winner of the first half and the winner of the second half play each other in a championship series. The idea of splitting up the season in two halfs came from the hope that weaker teams from the first half could climb up the ladder and compete for a second half title, something that happens quite often in modern day affiliated baseball.

Something that became a problem in the league was the umpiring. In those days, umpiring could be a dangerous job with some hostile crowds. The league had the idea of having only three umpires with a few as potential back up. But because the job of an umpire could be dangerous, the men on the job pushed for a tandem calling the games. Halfway the season the number of umpires came up again and the current umpires stepped off the field, making it necessary that the teams sacrificed one player to call each game, resulting in two-men teams per game. Later the league would hire more umpires and the two-man crews became the norm. At the end of the season, about twelve professional umpires worked for the league. 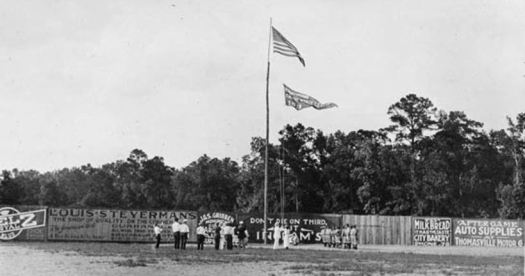 The 1913 championship banner is raised in Thomasville

After the Valdosta Millionaires won the first half of the season with a four game lead over the second place Cordele Babies, the Thomasville Hornets would win the second half with a six game lead over second place Valdosta.
So both half winners would face each other in the championship series. The Thomasville Hornets would win the best of seven series 4-2 after losing the first two games.

It was quite unique that the league finished its first season without dropouts and without teams that had moved to other towns. The sports magazine of that period, Sporting Life, reported that the season “was an artistic and financial success, all of the clubs that entered the race finishing in good condition for another fling at the game next year.”

Later that year, the league would chance its name into Georgia State League and all teams

joined the league in 1914. Many players of the 1913 season moved up to higher leagues and one of them ended up as Major League player. “Dummy” Murphy  finished the Empire State League season with a .338 batting average and was noticed by the Philadelphia Phillies, who signed him for the 1914 season. But with the Phillies he struggled at the plate, posting a lowly .154 in nine games and committed eight errors at shortstop. It may not have come to a surprise that the Phillies released him in May. He moved to the Jersey City Skeeters and hit .235 for the remainder of the season. He spent the rest of his 13-year career in the minors, mostly in the Pacific Coast League. At some point (1920), he served as player manager of the Charlotte Hornets of the South Atlantic League.