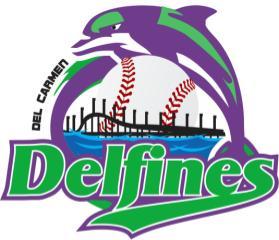 Kalian Sams, outfielder of team Kingdom of the Netherlands will not return to the Quebec Capitales in the upcoming season. On the day of the press conference of team Netherlands in preparation on the Premier 12 tournament, he told me that he liked it in Quebec but that he was looking for something different.

This something different appears to be the Delfines del Carmen of the Mexican Baseball League. This league has a AAA classification even though it is not affiliated to any MLB club.

Based in Ciudad del Carmen, Campeche, the team is one of the newer teams as it was founded in 2011 after the Nuevo Laredo Tecolotes (owls) team was acquired by Dr. Carlos Mejia Berrio. In the upcoming season, the team will be under the helm of Jose Offerman. Offerman has fifteen years of MLB experience under his belt. 2016 is a special year to participate in this league as it celebrates its 90th anniversary.

Journey man Sams has a lot of international experience under his belt. After he signed a deal with the Seattle Mariners in 2006 he worked his way through several levels of the minors. After he got injured at AA level, the Mariners released him just before the start of the 2013 season.  He was signed by the Padres that year. After they released him, he played in the Atlantic League with the Camden RiverSharks before he was signed by the Texas Rangers. Eventually they released him shortly before the 2014 season.
He went back to the RiverSharks where he spent a long time on the DL. As indy teams cannot afford to pay players on the DL, the RiverSharks released him. Eventually Sams ended up in Taiwan where he played for the Topco Scientific Falcons of the Popcorn League.

In 2015 he joined the ranks of the Quebec Capitales for which he was a very important
player. He belted 16 homeruns, stole 32 bases (four shy of the club record), hit 23 doubles and drove in 65 runs. He was named MVP of the French Canadian club.

Internationally Sams will be best known for his sacrifice fly in the game vs Cuba during the 2013 World Baseball Classic with which he drove home Andruw Jones for the win.